Long, long ago, in ages immemorial, when Brent was a young lad, he told his wife (ok, maybe he wasn’t thatÂ young of a lad): “Darling, three things I know to be true:

“Antipenultimately, when Brent Weeks starts speaking of himself in the third person, trouble is afoot.

“Penultimately, there are 10 kinds of people in this world. Those who know binary and those who do not.

“And ultimately, even if I get these ninja-assassin-kick-ass novels published, I will probably never get the respect I don’t deserve!”

Yet here I stand, doing an awkward pliÃ©, at the border of the mainstream… I’m not flexible enough to do a pliÃ©, so sometimes I have stumbled gracelessly, fouling my tutu on The Onion‘s A.V. blog.Â And now, once again, I find myself at the edge of the limelight, trying to go en pointe, when everything within me screams, “Allemande left!” In plain speech, The Night Angel Trilogy was mentioned in The Christian Science Monitor’s culture blog, as being one of the ten fantasy novels that would make great TV shows.

And now, as a special peek behind the curtain, for those of you who tolerated the previous paragraphs, I will show you exactly how book marketing works. The Christian Science Monitor says, “Cable viewers… couldn’t hope for better source material”!

[Pause for effect. Listen to the appreciate oooh’s from the audience.]

A slightly more honest rendition would be: “A blog that is in some obscure way connected to The Christian Science Monitor says, ‘Cable viewers who want blood and sleaze in equal amounts (I know you’re reading, True Blood fans) couldn’t hope for better source material.'”

And, speaking of the respect I don’t deserve: I recently found out that I am a finalist for the Endeavor Award, which is awarded to a distinguished Science Fiction or Fantasy novel published by a Pacific Northwest author announced every year at OryCon in November. See, I even have a logo:

The other contenders for the award are Cherie Priest, Patricia Briggs, Patricia McKillip, and Devon Monk, so even though I’m going to lose, at least I’ll lose in excellent company! Maybe someone can show me how to do a pliÃ©?

Baby Snaga. Baaaaaabyyyyyyy Snaga. I got you in my sights. I see you. Over there. Looking sharp. And beautiful. And shiny. Andâ€¦. Miniature.

Baby Snaga is the award for the also-rans. Itâ€™s a reward for the writers who are good enough to get into the finalist circle, but not brawny enough to take Papa Snaga from the hands of an unwitting world audience. This is what happens when a man destined for a Baby Snaga tries to touch Papa Snaga:

Do you see the crazed gleam in his eye? Thatâ€™s the look of a man who knows that Snaga will never be his. He can pet Papa Snagaâ€™s curves, but if he ever tries to wield the big man himself, heâ€™ll probably chop off a toe in a tragic woodcutting accident.

Warning to readers: that crazed, sad, pathetic little man above, there, THAT could be me. This is why I need your help. Desperately. Desperately. Need. Your. Help.

This year, the finals of the DGLA include a very talented pool: first, the Frenchman, Pierre Pevel, author of The Cardinalâ€™s Blades. Pierre may or may not have been involved in ruthlessly mocking my pronunciation of â€œCardinal Richeliu.â€ Oh, you think you can do better? Just try: Cardinal RI. SHEH. LYOOO. Doubtless Pierre will have the Francophile vote locked down. Anglophiles, consider this a direct challenge to your manhood. Or. Womanhoodâ€¦

Besides, what have the French ever given us except extremely good clothesâ€¦Â  and great wineâ€¦ and great cheeseâ€¦ and great architectureâ€¦Â  and charming waitersâ€¦ and Lilu Dallas clothed in a bandage?

Secondly comes Peter V. Brett. Who, to my eternal envy, has upon at least one occasion, hugged the aforementioned Milla Jovovich (although it is believed at this time that she was not wearing the bandage at the time of said hug). Â Peter Brett is the talented author of The Painted Man and The Desert Spear. He is also a noted hugger.

Thirdly, Markus Heitz has burst upon my consciousness like dawn after a night of too much fun. Markus, despite having infiltrated my own exquisite publisher in the US and UK, is carrying the honor (and zillions of votes) of yet another great Old World country: Germany. Dah Dah Dah. And besides, what have the Germans given us? Except music. Philosophy. Poetry. Clocks that run on time. Cars that actually look good.Â  18-hour Opera. And kick-ass fantasy stories. Oh wait, forget that last part. Donâ€™t vote for him! Look over here! Me! Over Here! The American. Ah, crap.

My fourth and fourth-and-a-halfth opponent is the ubiquitous (and also American) Brandon Sanderson. Brandon is the author of approximately 417 novels. Who is also known as the man who has lost the David Gemmell Legend award more times than anyone else has even been nominated.Â  However: Â DO NOT PITY THIS MAN.Â  He is also the only man in the world known to proficiently dual-wield Baby Snagas (having had more practice than anyone alive). And of course, the other halfth of his team is the utterly inimitable Robert Jordan who is, indeed, a legend. And if you vote for Robert Jordan (a personal hero of mine), I might someday– after a long and bitter time of personal sorrow–forgive you.

Ok, fine. So the fieldâ€™s crowded. And the other guysâ€¦ Theyâ€™re not half bad. Not even those guys who are splitting a Snaga in half. So, hereâ€™s the reason you should vote for me…

Ok, well gosh darn it, Iâ€™m just pretty psyched that I get a Baby Snaga! So thanks all you guys for getting me this far in the David Gemmell Legend Award. And, if youâ€™re a glutton for punishment, you can throw in a vote on the losing side. Itâ€™s only a couple clicks of your mouse, and maybe youâ€™ll help me sacrifice some dignity by coming in a distant fourth rather than a distant fifth-and-a-half (I hate it when the write-in votes for Mickey Mouse beat me)! Go here to vote.

Thank you so much for the honor, and I hope I entertained you with this brief fight preview! (raw-KEY, raw-KEY, raw-KEY, ROCKY!) Câ€™mon, even the Russians voted for the underdog, and that was during the Cold War!

Your wait is not over!

BUT if you’re looking for a handy guide to the available international editions of The Night Angel Trilogy and The Lightbringer Series -Â Â then you’ve come to the right place. We now have an International Editions page, and we’ll be posting updates as books are both bought and released by publishers around the world. The page has links to the publishers’ actual websites, as well as places to go to buy the books online (unless we haven’t had luck finding them online, or if they aren’t published yet!)

And if you just wanted a quick overview of some of the cool covers… scroll away!

Posted on December 13, 2010 in Uncategorized

Don’t miss a brand new interview between SFSignal’s Patrick Hester and Brent on the wonders of Oregon gas stations, the perils of lengthy book signings, trilogies versus mega-series, and whether Teddy Bears can save bookstores…

Posted on September 27, 2010 in Uncategorized

Also, please make sure you go to the forum and check outÂ Demand It! for the Black Prism Tour. Now’s the time to let your voice (or clicking finger) be heard. Please don’t work the system though. My fear is I’ll show up in some city and be greeted by a lone, crazed internet bot. 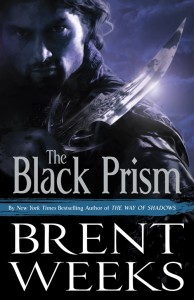 As we shared previously (see the November post about the leak below), the working image for the cover of The Black Prism came out a few months back. Now, I am pleased to release the final cover art forÂ The Black Prism.

Releasing new covers is, quite honestly, tricky. From a business standpoint, you want people who enjoyed the Night Angel books but can’t evenÂ rememberÂ my name to be able to identify that these new books are Brent Weeks books. At the same time, you want to let people know that this is a new series, that the feel of these books is new and different, and basically (if you’re Orbit) appeal to the greatest audience possible. This is made harder if every Tom, Dick, and Harry now has a cover with a hooded man with a sword. (Orbit appears to have started a small trend with my last covers.) What I really appreciate about Orbit is that they didn’t settle with a “good enough” cover. The last cover looked good, in my opinion. It communicated that this was Â a Brent Weeks book; and it was visually striking, but it just wasn’t quiteÂ perfect for these books. I understood the decision, and focused on makingÂ The Black Prism the best book I could.

Then Orbit did this. Very gutsy, very different, very cutting edge. Is it a bit of a gamble? Yes. Do I appreciate that? Absolutely.

Lauren Panepinto is a genius.Â More about Orbit’s coverÂ launchÂ of The Black Prism here. With non-spoiler-y back cover blurb!

Posted on March 8, 2010 in Uncategorized

I’m happy to announce I’ve signed a deal with Eksmo Publishing (Ð­ÐºÑÐ¼Ð¾) to publish The Way of Shadows and Shadow’s Edge. And of course I hope we sell well enough that they’ll buy Beyond the Shadows as well. I’d hate for a reader to never get to readÂ Beyond after SE’s ending. It’s just cruel. (But it’s not a cliff-hanger. Really. There’s a satisfying ending. It’s just that there’s a big twist in the epilogue. Don’t peek!)

I’ve also had lots of queries about what’s next. I’ve addressed this on the forum, but you don’t want to pick through posts on some forum, your mouse-clicking finger is tired, you just want the deets, man. Fair ’nuff.

I’ve signed a new three book deal with Orbit. I submitted an outline, and so much happened in the story, they were like, “Looks like three books to us, but do what you think is best. We just want your next three books.” Sweet. “And we want them fast. Your deadline is a book each November.” Gulp. So the trilogy is (extremely) tentatively titled Black Prism. I’m working as fast as I can, and I’m really excited about what’s forming. It’s set in a new world. Think more 1500 Mediterrean Sea, rudimentary fire arms and magic together. Woot. But don’t worry, it’s not a pirates-and-their-peg-legged-mateys book. Cross my heart. But there are awesome characters, lots of action, much cooler magic this time out, secrets, lies, betrayal, and butt-kicking. You know, the good stuff. After this trilogy (if it is indeed a trilogy), I will be returning to Midcyru with a new series. And yes, numerous of the important characters who actually survived the end of the Night Angel Trilogy will show up. 🙂

Next week, I hope to be able to announce another foreign deal, announce the pub dates of the foreign deals we’ve already got, and maybe post a cover or two…

No scheduled appearances at this time.

We use cookies on this site. For more on our cookies and changing your settings CLICK HERE. If you do not consent to us sending you cookies, then your browsing functions may be limited on our site. Ok